There’s a woman I know who spent five years in a relationship.

Or so she thought.

She and her paramour did, after all, live on separate coasts. He was older, distinguished and fine. He had the kind of career that warranted frequent travel, so he often whisked her away to exotic locales, sometimes within a day’s notice. The sex was great. The gifts were expensive. And they were spiritually entwined, that is, according to the psychic who told her that in a prior life, she’d saved his.

There relationship was perfect.

Perfect up until the day she announced her plans to  move from LA to New York.  It was a chance, she thought, to take their relationship to the next level. But much to her surprise, her honey did not squeal with joy. He didn’t even extend an invitation to reside at his place, not even temporarily.

Nope. As the story was recounted to me one snowy evening over black bean burgers in Harlem, he said something to the tune of  “As long as you’re doing this for your career, you know, and not for me.”

She relocated anyway. Found a job doing what she loved in a city where opportunities for  Broadway babies abound.

He, feeling as if the sky were the limit, jumped out of a plane, and missed death by a  hair when his parachute failed to inflate.   He broke most of the bones in his body.

And even in his feeble,  bed-ridden state, he summoned the strength to tell her he needed some space.

Perhaps by now you’ve already surmised the moral of this little tale.

Some women fake orgasms. Some men fake entire relationships, and it’s this potential for romantic duplicity that should keep us all on our toes.

The Diamond is Real, But is Your Relationship?

I was reminded of that truism when I stumbled on an celebrity Instagram feud centering around a  big, fat, heart-shaped canary diamond ring. 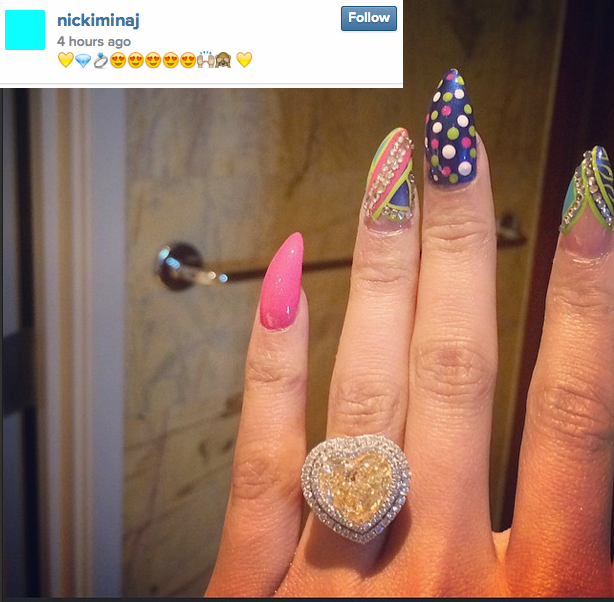 Nicki Minaj made headlines when she posted this photo to her Instagram, her  coy way of announcing a maybe-engagement to fellow rapper and love interest Meek Mills. 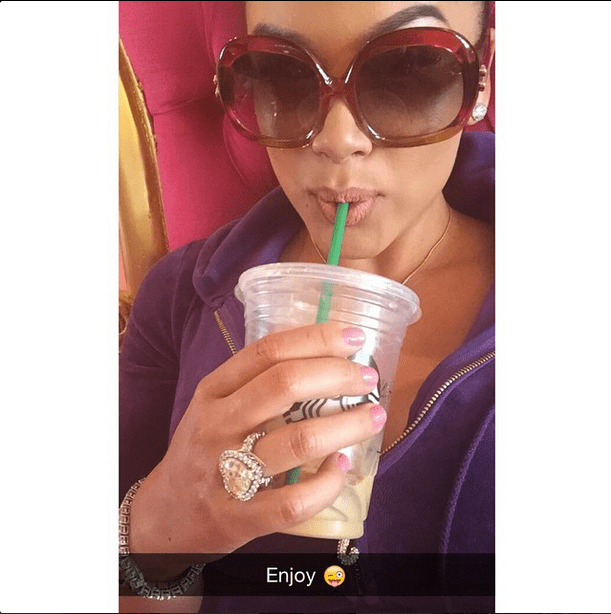 “Bad Madina” just so happens to be girlfriend and former  masseuse to boxing champ Floyd Mayweather, a man notorious for domestic abuse his ability to dodge marriage just as well as he can dodge a punch.

Not here for the umbrage, Mill clapped back with this comment.

His was a stinging retort,  no doubt, but perhaps that shade would have been better served had he stated the obvious.

One ring is on the right hand. The other, on the left.

Both rings are sumptuous in size, rare, and wildly expensive. But if one is a trophy ,then the other is a consolation prize.

Some  of the most extravagant jewels in the world were once acquired  by an man in love.  The 69-carat diamond ring Richard Burton gave his wife  Elizabeth Taylor after a kitchen table spat. The $5 million 18-carat diamond Jay used to propose to  Bey.   The million dollar diamond and sapphire ring Napoleon presented to the soon-to-be Empress Josephine. 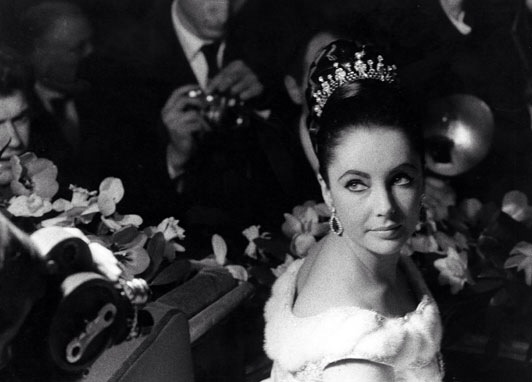 Men are action-oriented and it’s natural for them to demonstrate  feelings with romantic gestures– compliments, dinners, flowers, holidays , and sometimes yes, fabulous jewels.

But I’m realizing that quite often, men “in like” are romantic too, often using soft words and kind acts to keep the woman satisfied, and the liason, stalled.

Floyd Mayweather was “engaged” to his ex Shantel Jackson for five years without so much as  setting a wedding date.

My friend was committed to a man for the same amount of time, only to find out that he’d never actually been committed to her.

And even I was once involved with a man who gave 20 while I gave 80, and I treasured every morsel, telling myself that his anemic affection was in fact the real thing.

That’s because in the throes of passion, having just accessed that magical parallel universe of romantic possiblity, it’s really hard to tell real from fake.

When cupid’s wound is fresh, the men we admire are rarely just men. They are wizards, larger-than-life figures for whom we will trek down a perilous yellow brick road. Trouble is, many of us wake up one day to find that the  wizard we so wanted was only a man, and the relationship we thought we had, much like the journey through Oz, was too,  a figment of our imagination.

There’s a name for that. Parataxic distortion is the human inclination to skew perceptions of other’s based on fantasy. This psychological phenomena explains our tendency to aggrandize our romantic suitors, using them as a canvas on which to project our greatest hopes and dreams. Often our lovers are a merereflection  of who we wish to be, rather than who they really are.

It’s easy to be swept away by  grand, romantic gestures–sweet texts, intimate dinners, passionate sex, the things a man in like can give in lieu of love.

For some of us, the trappings are  enough. And that’s okay. Some women hope for money, while other’s hope  for commited love.

But so long as we’re all out here putting our hearts, minds and bodies on the line to pursue whatever it is we’re after, it’s best to see the forest for the trees.

In the case of my newly-single friend, she still visits her estranged beau from time-to-time to rub his feet and make him laugh. Maybe she’s hoping that sky-diving accident will bring about a change of heart. Or maybe, just maybe, she’s biding her time until she finds the real thing.