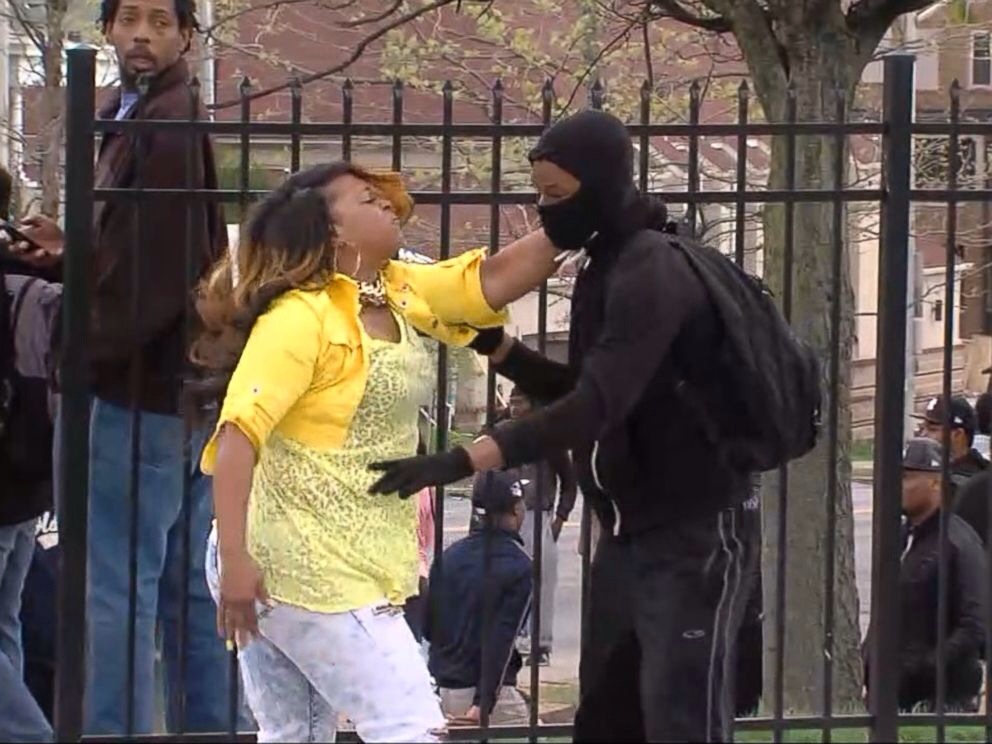 It was the ass-whooping seen around the world.

A local news crew captured video of Baltimore resident Toya Graham dragging her 16-year-old son away from the melee at Mondawmin Mall Monday, where protestors, many of them teens, hurled bricks and other objects towards police. Cameras were rolling as she  chased him, snatched his ski mask, threatened him with an incantation of expletives intoned as only a Black mother can, and then slapped him, several times,  into submission.

The clip, as we now know, went viral immediately, spawning funny internet memes and ardent praise for her hands-on (literally) ol’ school approach to motherhood from folks on both sides of the debate.

Police chief Anthony Williams praised her at a press conference.

“You had one mother who grabbed her child who had a hood on his head and she started smacking him on the head because she was so embarassed,” he said. “I wish I had more parents that took charge of their kids out there.”

But anyone  with a Black mom knows that Toya Graham didn’t set out to be a hero or an internet sensation. Neither was it shame nor dismay that propelled her to extract her  son from the fracas. It was fear.

As Graham told CBS,  “At that point, you know, not even thinking about cameras or anything like that — that’s my only son and at the end of the day, I don’t want him to be a Freddie Gray.”

The media has found a way to  put the supremacist spin on all the stories emanating from Baltimore, including this one. News outlets act as if a few “good” moms could extinugish the fire of insurrection quicker than the National Guard– as if lazy parents  are responsible for Baltimore’s  turmoil.

The problem with this story as it’s being told  is that it further  perpetuates the racist narrative that urban blight can be traced back to  broken families and loose morals. It’s a narrative that denies the existence of oppressive systems designed to maintain the ante bellum socioeconomic status quo, and deflects  from the real causative issues–poverty, failing schools, police brutality and racist sentencing laws.

The policymakers of the white society have caused the darkness; they create discrimination; they structured slums; and they perpetuate unemployment, ignorance and poverty.

Her actions that day illustrate the angst  Black parents experience —  angst of knowing their children walk through the valley of the shadow death because of  forces completely beyond their  control.

Toya Graham  knows that the odds of survival are stacked against her son,  particularly in a city like Baltimore where prisons receive greater investments than schools. She knows that neigborhood games of pick-up can be interrupted by stray bullets and that although graduation isn’t guaranteed, without a college degree, the illegal drug trade will be his best shot at employment. She knows there’s a 1 in 3 chance he will spend time in prison, and a 1 in 60 chance that he’ll become one of the 1.5 million Black men the New York Times describes as missing, absent from society due to early death or incarceration.

She knows that society values property more than Black lives.

The irony of the mainstream applauding a mom for coporal punishment, at a demonstration, no less, against police brutality, isn’t lost. In any other situation, those who applaud Graham now would accuse her of abuse. But alas, society has taken great comfort in this particular story and it’s dubious subtext ; if Black parents disciplined their kids, the police wouldn’t.

But you and I both  know that’s not the case. As recent fatalities remind us, the mere act of breathing while Black is enough to warrant handcuffs, and sometimes even death.

My grandfather used to say, “Life can kick your ass harder than I ever can.”

That’s the belief in many Black households where parents would rather administer tough love at home, than leave the discipline up to the criminal justice system.  For Black parents who take on this challenge, it’s not a matter of sparing the rod, it’s a matter of sparing a life.